With the release of Super Smash Bros. Ultimate on the horizon, it can be hard to think about anything else. The massive popularity of Smash has inspired countless imitators with varying degrees of quality. While Nintendo is still hard at work developing Smash, fans of the game have gotten older and are developing their own unique Smash-like games. If you’re a computer gamer who’s trying to Smash but doesn’t know where to start, look no further.

We couldn’t add Gang Beasts to the list since it isn’t similar enough to your typical Smash game, but it’s still worth a mention. Gang Beasts is basically a fighting game with characters that feel like they’re from Human Fall Flat. You fight against others in both online or local multiplayer. You pummel on each other until a player wins by ringing out every other player.

It’s nothing like a Smash game like Super Smash Bros Brawl, but it’s still worth checking out! 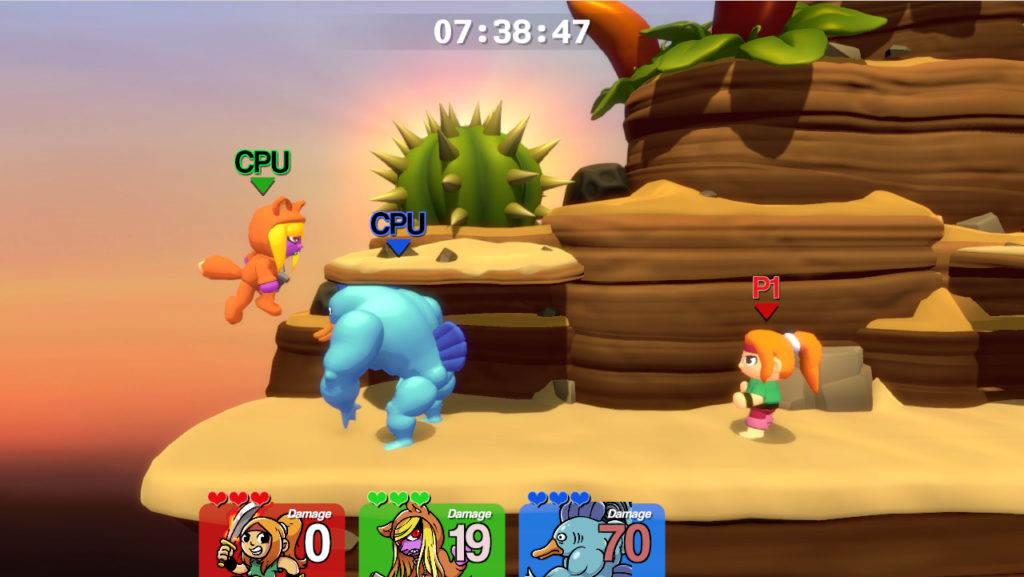 Slap City is a hilarious and inventive Smash clone made by Ludosity Games.  It is clearly a game developed by fans of the Super Smash Bros. franchise. The game may not take itself super seriously with its oddball characters and goofy presentation, but the gameplay is sharp and responsive. Feeling like a cross between Super Smash Bros. Melee and Smash 4, the game feels fast-paced without being overwhelming.

Unlike most other Smash-like games, the characters in Slap City are not based on popular Smash archetypes like Marth, Fox, or Captain Falcon. Instead, the characters are wholly unique.

Fishbujin is a hulking fish-man monstrosity who uses dumbells, super armor, and wrestling moves to smack down the competition.

The game includes a robust online matchmaking system that worked well when tested. If you need to take a break from fighting, you can try the amazing Slap Ball mode, a brutal cross between basketball and volleyball that sees players beating the snot out of each other in an attempt to hit a ball into a basket.

At $6, the game may be cheap but it certainly doesn’t feel cheap, as a lot of charm and care clearly went into its development. A trailer for Slap City can be viewed below. 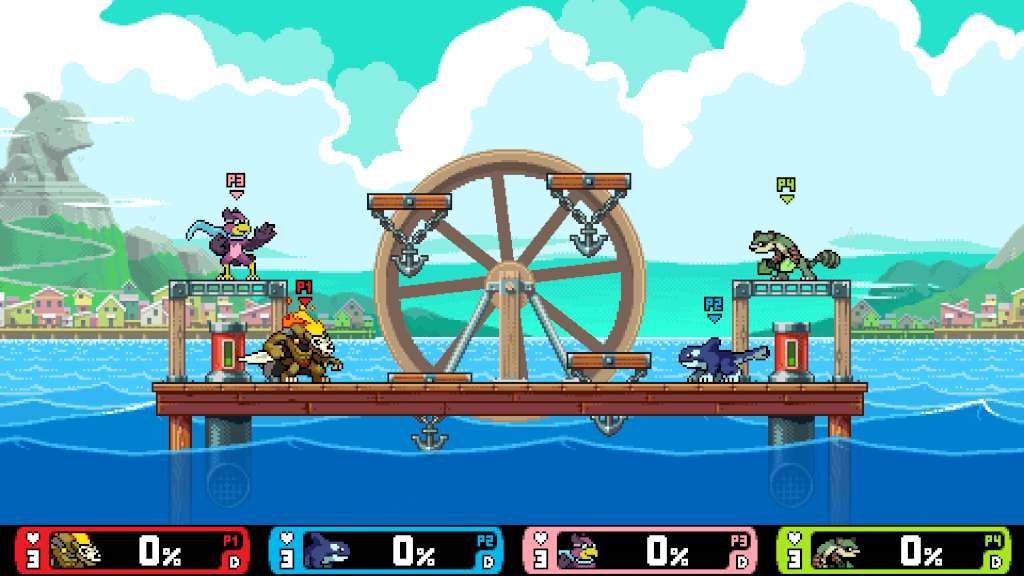 Rivals of Aether is the most unique Smash clone out there, both in terms of presentation and in gameplay. Unlike most Smash clones, Rivals uses 2D sprites, which are detailed yet simple, clean, and beautifully animated. The soundtrack is filled with electrifying and uplifting 8-bit melodies that stay buried in your head for days.

Gameplay-wise, Rivals simplifies and modifies Smash’s formula to give it its own unique identity. Most of the standard Smash staples, like standard attacks and one-button special attacks, are present. However, Rivals upheaves many Smash mechanics to stand out from its inspiration. Unlike Smash, ledges are not grabbable. Instead, every character can wall-jump, and each character can use their recovery again after wall-jumping once.

Additionally, shields and spot-dodges have been replaced entirely with the parry system. When a player presses the parry button (by default mapped to the triggers) their character will briefly glow blue. If this another character hits them while they are glowing, the attacking character will be briefly stunned, opening them up for combos. Parries can also be used to reflect combos. Parrying is risky and if mistimed can lead you vulnerable, but the payoff is worth it. Despite the loss of shields, rolling and air dodging is still possible (and yes, you can wavedash).

Each member of the roster is based on one of four elements (fire, water, earth, and air). Every character has an elemental gimmick that lets them turn the tide of battle. For example, the whale-dog creature Orcane can splash a puddle of water onto the stage. From this puddle, Orcane can summon a storm of bubbles, power-up his strong (smash) attacks, and teleport.

Manipulating the stage with your element is key to victory in Rivals. The character’s gimmicks are unique and lead to a lot of different combo and setup possibilities without being too overpowered. The character roster is balanced beautifully, with no character coming close to being overpowered over the rest.

Rivals is frequently played as a side event at Smash tournaments. The in-game matchmaking service is constantly populated and the developers work on balancing issues and glitches very quickly. As of now, it is currently by far the most polished, unique, and inventive Smash clone on the market and we highly recommend it. Watch the trailer for Rivals below.

Everything we know so far about Super Smash Bros. Ultimate

For the Melee diehards out there, Icons: Combat Arena was made for you. Developed by Wavedash, the game was built from the ground up to build off of and subvert Melee’s metagame. The characters are hyper-stylized, with futuristic, busy designs similar to Overwatch. Most of the characters included are based on top-tier characters from Melee. For example, Kidd the space goat is an obvious homage to Fox, as he has a blaster, multipurpose reflector, and directional recovery.

Those who enjoy competitive Melee will find a character that’s similar to their main but is different enough to be fresh. The gameplay and physics are basically 1:1 with Melee, with little to no changes from the core gameplay. If you want a fresh twist on Melee with online play and new character designs, this is your game.

Icons is free-to-play but, it does not come with all the characters unlocked. To unlock more characters players must either spend real-life money or use in-game currency, which can also be spent on emotes, taunts, holograms (think sprays from shooting games), and skins. All of these can also be found in loot boxes. While the loot box economy of the game is cause for concern, hopefully, the developers create a system that is rewarding and fun instead of greedy. The trailer for Icons can be seen below: 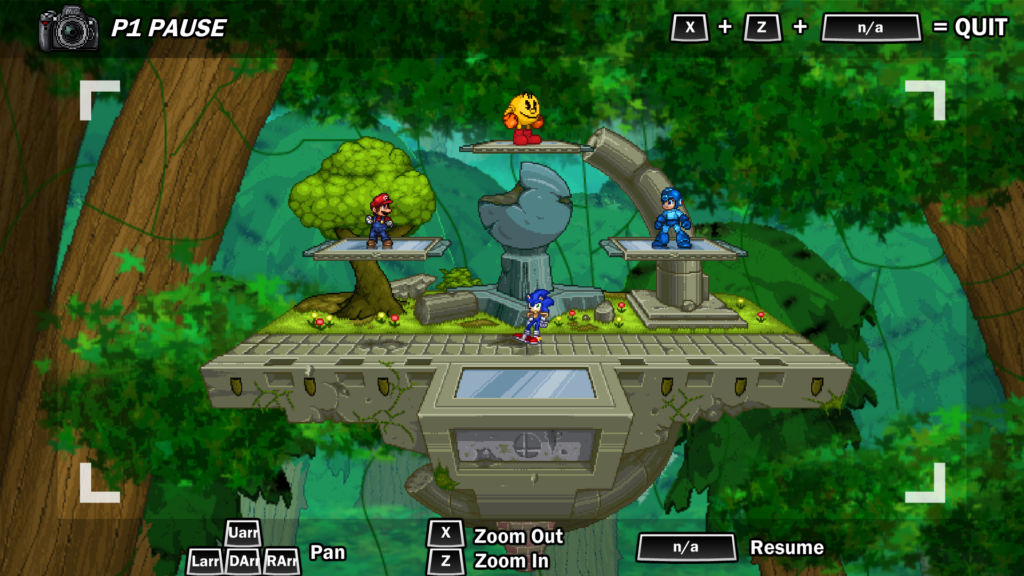 Sometimes when you want to play Smash, only Smash will do. As the name suggests, this fan-made Smash game was made entirely in Flash. The game is playable in-browser and is also downloadable. The gameplay is very similar to Smash 4, and any Smash fan should be able to jump in and pick up the game easily. It’s also a really fun party game to play with friends!

The game includes a large portion of the Smash cast, such as Mario, Link, and Donkey Kong, who play very similarly to their Smash 4 counterparts.

Also included are many characters highly requested by fans to be in the next Smash, including Bandana Waddle Dee, Chibi-Robo, Bomberman, and Isaac. Here’s hoping Shovel Knight gets added soon!

Most interestingly, Super Smash Flash 2 includes a few characters that come from anime rather than video games, such as Goku, Luffy, and Naruto.

The game is impressively polished, especially for a fan-game. Character sprites are detailed and smoothly animated, making them familiar to play. The new characters have incredibly creative movesets that pay homage to their sources. Bomberman, for example, is a trap-based character who can litter the battlefield with bombs that he can detonate at will. Anime characters fit in well with the rest of the cast, using special moves and voice clips straight from their shows.

The stage list is similarly impressive. The game includes many fan favorites such as Hyrule Temple and Corneria, while also including creative new ones such as a giant 3DS, Pokemon Gold and Silver’s Lake of Rage, and Donkey Kong Country’s Gangplank Galleon. It’s clear that the game was made by people who are incredibly passionate about Nintendo and the Smash Bros series.

The game has a decently large competitive player base and online matchmaking scene. Check out this trailer below:

This crazy version of Super Mario will trip you out ►

Everyone is here with Super Smash Bros. Ultimate ►

Trending Is this cardboard arcade machine the best thing you can do with a Nintendo Switch? ►